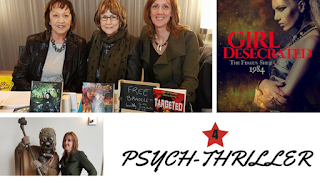 On Saturday Feb 4th, I attended GenreCon2017 in Guelph Ontario, where, for the first time ever, I tried selling my novel at a Con. I was armed with some realistic expectations from Brandon Sanderson (Writing Excuses), Joanna Penn (The Creative Penn), and other authors I network with, so I'm actually quite pleased with how things went. I set realistic goals and as a result, succeeded at all of them, and I learned a few things about selling at conferences. #1 I can sell at a Con and keep my pride too :)

I took "Girl Desecrated", first-in-series of The Fergus She, which I published on Halloween 2016. I had a little marketing scheme going, which included pre-preparing a 3 second blurb, a 30 second blurb, and offering free tree-of-life bracelets with each sale. I also dropped my novel's price $4 from the Amazon.ca cost, and signed each copy with a quote from the novel.


“Bad-girls, highlanders and vampires, in Guelph!”

Now, I know I could have been more serious, sitting at my table, waiting like a trap for potential readers to wander into my view, where I would then launch into a relationship-building dialogue that would result in an exchange of cash for my work. After all, I was prepped. I had listened carefully to podcasts that explain how it's done and had read (can it be hundreds?) articles on how to do it better. Some are listed below:
So, yes, I could have stayed at my table, but once I got to the Con, I got swept up in the convention excitement. I was having a blast looking at the costumes and chatting with the other vendors. I picked up lots of display tips from the more seasoned authors and writing groups. The table my novel was on was also beside, Nathan Salmon, an artist from the East Coast who had some phenomenal selling skills, and though I didn't take actual notes on those skills, I watched him work the crowd with finesse, and ended up buying a painting for myself. I also spent some time watching the Droids' antics and often wondered who the people were beneath the Star Trooper, Batman, Spider-Man and Desert People costumes.
Then, I was off playing in the VR room, which was my first experience with this type of gaming...a mind-blowing experience! And of course, there was a sale at Zacks at the Stone Road Mall across the road, so off I went with my two author Aunties in tow.


It’s 1984, Rachel’s 18th birthday, and she’s drinking alone in the Albion, feeling crazy and depressed. What she doesn’t know is a hereditary demon is hatching, the highlanders are coming, and hell’s about to cut loose. But it’s okay, because Rachel’s a bad girl who knows how to party.

You might be wondering why I was so laissez-faire at my first book sale at a genre convention. Well, it's like this, I went in with the expectations set by a number of authors I know, and by successful authors who podcast and write about their writing journey. Instead of thinking I was going to make thousands of dollars selling hundreds of copies of my psych-thriller, "Girl Desecrated", my expectations were as follows:
Based on those expectations, I came away feeling great about my first novel sale at a Genre Convention. I'm actually quite pleased with how things went. I succeeded at all of the above, and I learned a few things about selling at conferences. I've listed them below:
Overall, I'm still glowing from my first GenreCon selling experience :)
I'd love to hear about your convention experiences and other writing/genre cons you think are worth setting up at.